“Research and development in the innovation field of green hydrogen is already well advanced, the technical feasibility of the technology is visible in various applications already, however the implementation into practical applications is stalling”.

Green Hydrogen – a carbon free fuel made from water by using renewably produced electricity to split hydrogen molecules from oxygen molecules – will play a major role in the future of sustainable fuel and energy supply, not only in Europe but also in other parts of the world.

Africa has a huge and growing demand for energy, and in most places the environmentally friendly generation of it is underdeveloped. Africa will have to consider Green Hydrogen as source of zero emissions fuel for, amongst others, energy production, heavy manufacturing, long-haul trucking, and aviation to end the reign of fossil fuels and slow the world’s warming trajectory.

“H2 ATLAS-AFRICA” project is the first-phase of a joint initiative of the German Federal Ministry of Education and Research (BMBF) and African partners in the Sub-Saharan region (SADC and ECOWAS countries) to explore the potentials of green hydrogen production from the enormous renewable energy sources within the sub-regions. The aim is to support sustainable and economic development through a viable hydrogen economy with a high potential to make Africa an exporter of green hydrogen, hence gaining even more relevance in international energy markets”
May 29, 2020 by WASCAL

FZ Jülich as the preferred partner for the H2 Atlas Africa project, in cooperation with SASSCAL (Southern African Science Service Centre for Climate Change and Adaptive Land Management) and WASCAL (West African Science Service Centre on Climate Change and Adapted Land Use), has a huge research ability and is part of the decision-making regarding which African countries could be suitable for Green Hydrogen production.
Namibia is one of the countries selected for the H2 Atlas Africa project.

Green Hydrogen Namibia (Pty) Ltd, based in Namibia, is well positioned for a Green H2 project with local expertise, an established network, and practical development.

Through sound management with a track record of creating value and solid knowledge of the Namibian market, Green Hydrogen Namibia (Pty) Ltd has positive engagement with SASSCAL (as a stakeholder), as well as relevant government ministries and public entities.

The network includes Namibian and German companies within the renewable energy sector, the electrification of passenger cars, vans and trucks as well as the development of fuel cells and other hydrogen applications.

A joint Green H2 operation in Namibia, in the form of a practical application with simultaneous research, will demonstrate the feasibility of a sustainable Green Hydrogen Value Chain in Namibia.

Production of Green Hydrogen through PV, distribution, refueling and usage in FCEV’s will be a landmark project to create awareness and to gain experience.

This could lay the foundations for a new technology and energy sector in Namibia and help the country prepare for future export opportunities created by the global adoption of Green Hydrogen.

“The SADC region which relies heavily on fossil fuels is ideally positioned and will benefit from such a project as the global village begins to embrace renewable energies. As such, green hydrogen has the chance to become the oil and gas of the future. It is a game-changer” emphasized Dr Rövekamp. “This could be achieved already within the next two to three years and SADC has a historic opportunity of making the region a Green Hydrogen champion if they take the right actions now” he added. Energy and CO2 intensive sectors in the SADC region can significantly reduce their CO2 emissions by using Green Hydrogen from national production. The availability of Green Hydrogen can attract new investments in energy-intensive branches and create new jobs. Furthermore, the “SADC region can place themselves as an exporter in a trillion-dollar market for Green Hydrogen production as the region has excellent conditions for Hydrogen production” stated Dr Rövekamp.

Dr Rövekamp concluded by giving a practical example of how one of the SADC countries, Namibia, “seems to have a very good starting position. The country could have one of the lowest production costs worldwide and this on a large scale. You need a lot of space for renewable energy plants. Namibia has one of the largest cost-competitive production potentials”. He added that “Namibia has a real sweet spot in Walvis Bay as it is a deep-sea port, strategically located and central for neighboring countries without access to the sea, especially Botswana, Zambia and Zimbabwe. Infrastructure and logistics are key success factors for a green hydrogen economy thus Namibia is in a pole position. This opens up new opportunities for employment and economic growth not just for Namibia but the entire SADC region”.”
Greater Mukumbira, Posted 17th August 2020, In Articles, www.sasscal.org

Apart from the self-consumption of initial production of Green H2, further off take possibilities for Green Hydrogen can be determined and established, and the project can be modularly scaled up to accommodate for additional demand.

Currently the sale of Hydrogen in Namibia is as low as 33kg/per year. However, there are plans for a steel plant in Otavi and decarbonization ambitions within the mining industry (Namibia, Botswana, Zambia, etc.) are prevalent.

Namibia with its NDP’s (National Development Plans) and the ratification of the Paris Agreement emphasizes a decarbonization mainly of the transport sector.

The transport sector in Namibia is responsible for 70% of GHG emissions; Worldwide 18-22% of Co2 emission is from road transport.

With the operations of the Hydrogen Value Chain in Namibia, the landmark project will create jobs, foster knowledge transfer and vocational education and establish a new energy/technology sector.

A trial of FCEV’s between Walvis Bay and Windhoek (distance: 400km) is planned – apart from long-haul transport of goods we also plan to operate 1-2 16 Seater public transport busses.

The preferred location will be in the ERONGO region, a region hardly usable for commercial agriculture and of low interest to the tourism industry.

Land is available, with the option of upscaling the operation at a later stage.

Water supply for the landmark project (approximately 5-10cbm of water) can be secured through own boreholes. For further extension of the operation an existing desalination plant could be supplier of the required water.

An existing pipeline used for water runs close to Arandis, a small mining town in the Erongo region. The necessary extension in future would be an approx. 40km stretch of the existing pipeline 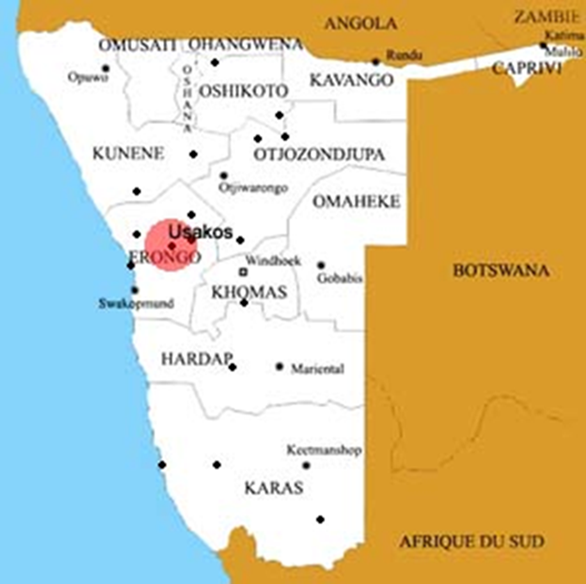 The project location is located near the “Walvis Bay Corridor”, a tarred road from the deep-water port of Walvis Bay, with access across Namibia and SADC, as well as the “Transnamib Rail” railway.

This offers several options for transport to future off-takers within Namibia and the SADC.
This anticipated location is convenient regarding distance to Windhoek (180km) and Walvis Bay (220km).

The project will attract further investment through “proof of concept” and it does offer great prospects for the export of Green Hydrogen to SADC (Southern African Development Community) and its SACU (Southern African Customs Union).

The location in Namibia offers a splendid baseline for an expansion into the SADC region with more than 300 Million potential consumers.

Long term opportunities include the possibility of green hydrogen export to Europe.

The different phases of the project will need to be discussed and agreed on with potential partners. The aim is to start the real-life operation soonest.

Namibian stakeholders, e.g. Nampower and Ministry of Mines and Energy, would welcome a timely implementation.

As sooner a green hydrogen operation starts in Namibia as sooner, we generate useful data and experience in an uncharted territory.

The project will, combined with practical application and science/research, establish best practice within the Green Hydrogen Chain in Namibia.

The landmark project, with an estimated project duration of 5 years, will create the necessary economic awareness and will be a socially beneficial implementation of a new energy source.
A demonstration of “it is possible” as well as the positive impact of Green H2 on economy and climate protection.

The precise calculation of production cost, logistic expenditures, and feasibility within the transport sector will act as guidance for other stakeholders, incl. the Government of Namibia. It will create additional investment opportunities for local and international institutions, and it will accelerate a much-needed technology- as well as knowledge transfer. It will direct the way forward for upscaling and export opportunities.

The project will also increase off-take opportunities as green hydrogen will be locally available and provide an alternative option for other consumers.

The job creation, direct and indirect, will be a relief for the local job market and it will explicitly include women and youth.

With the association with intended partners, vocational training possibilities in Germany are anticipated. Furthermore, the project will facilitate “on the job” training.

The project aims to evolve into a self-sustainable operation and demonstrate the viability of scalable green hydrogen production.
It does offer participating technology suppliers to expand its operation throughout Southern Africa.

Our existing electric vehicle operation (retrofit section) complements perfectly with the conversion of van’s/truck’s to FCEV. The entire fleet for the operation will be powered by renewable energy (PV to BEV/FCEV) and aims to create a sustainable “circular economy”.

Objective 2 of Green Hydrogen Chain Namibia is to facilitate the development of a market for low and zero-carbon smaller trucks and heavy-duty vehicles using hydrogen for logistic applications and gain practical experience in different regions in Namibia. This project will become a transnational living lab and provide a basis for the development of a zero-emission vehicle industry in Namibia and the SADC area.
Fuel cell electric vehicles (FCEVs) deliver many essential advantages, such as zero emissions, long-range, fast refueling, etc. For heavy-duty and long-distance vehicles, hydrogen as a fuel is an excellent choice.
FCEV infrastructure will expand on existing fuel distribution and retail substructure, generate cost savings, sustain local employment and capital assets.
Other than the reduction of carbon dioxide emission, the use of hydrogen in the transportation sector supports regional air quality improvements and noise reductions.

The aim is to introduce a sustainable, collective system to society at large, based on renewable energies: Producing, transporting, processing, and marketing hydrogen together. This is an ambitious project that requires a great deal of know-how, funding, and conviction – and at the same time can be seen as a milestone with regard to the energy turnaround. 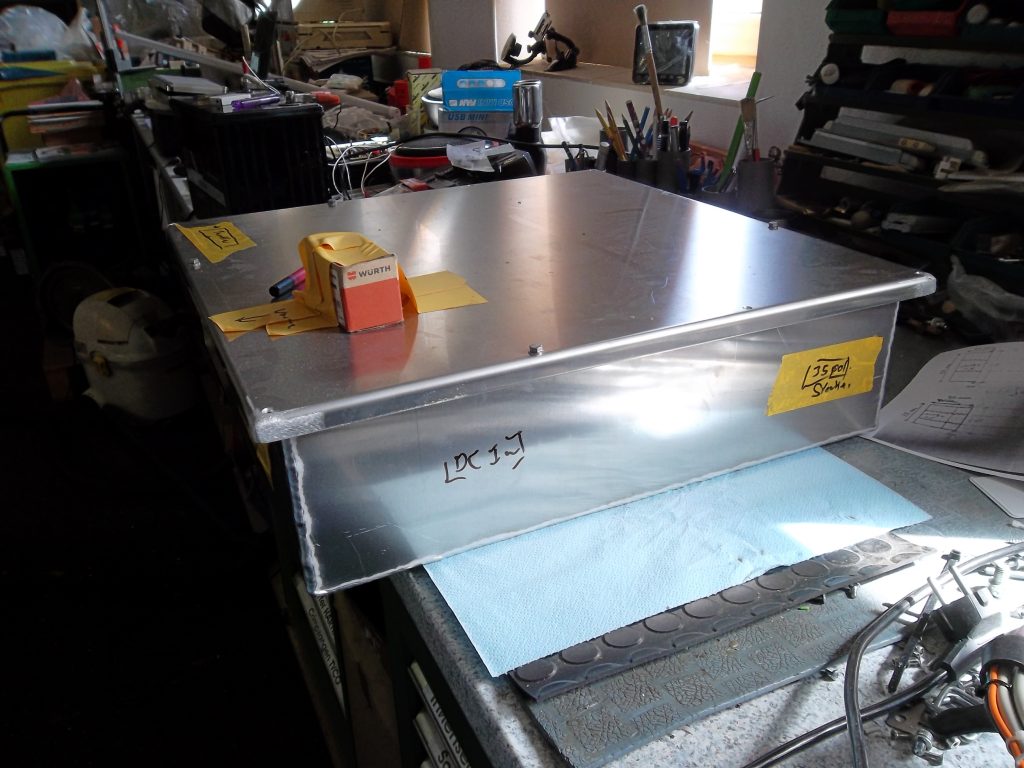 Make an Appointment
Scroll to Top