Silently moving through the city When it comes to electro-mobility, most people think of complex technology and expensive brands. However Axel Conrad and Madryn Cosburn of e-Cars Namibia have converted an off-road vehicle with a combustion engine into an electric car, demonstrating that it does not have to cost a fortune.

Axel Conrad slips the key into the ignition of his SUV and turns it on.

You can’t hear a thing.

“The engine is already running, now you can just drive off,” he tells me enthusiastically.

Axel releases the handbrake, depresses the clutch, engages the gear and simply drives off. All you hear is a soft humming; otherwise the engine is dead quiet.

Until recently, Axel’s car still had a normal combustion engine. But last month he and Madryn Cosburn converted it into an electric car.

The idea was Axel’s. He has been involved in the automotive industry for almost 30 years and has worked for several manufacturers in Germany, South Africa, the US, Kuwait and Qatar. The potential for electric mobility in Namibia is obvious to him.

“The sun here shines about 300 days of the year. This creates ideal conditions for obtaining solar energy,” he says. “If you use this energy to charge the batteries of electric vehicles, you drive without emissions.”

Unlike Axel, Madryn is not involved in the automotive industry. Actually he works as a consultant in the television industry. The fact that the two are working together on the project was not planned. “Axel and I are neighbours,” Madryn says. “I saw the car in his garage and asked what he was doing. I found the project so exciting that I decided to join him!”

Madryn is a tinkerer and he knows his tech. But it’s not only because of his expertise that Axel enjoys working with him. “We’ve been living next door to each other for 17 years, but with this conversion we’ve really clicked,” Axel says.

The conversion took a month – much longer than initially planned. However, the work they put into the project before the renovation began, was worth it. “We didn’t just go ahead blindly hoping it would work. We knew exactly what we were doing,” Axel says.

But is it really that easy to turn a combustion engine into an electric vehicle?

If you ask Axel and Madryn, then yes. “Basically, we just disassembled the old engine and replaced it with something quieter, greener, and much cooler,” Madryn says with a grin.

What did the conversion cost?

“We can’t give you a specific answer, but as soon as we know, we can make concrete statements about the price,” Madryn says.

With regards to their car’s range, they wave off the question.

“It’s not about asking what the car can do, but about what it can do for us,” Madryn says. “Most people only use their car to go to work or for shopping. A range of approximately 60 km is quite sufficient for this.”

Should they receive an order from a customer, they say they will first discuss what requirements the owner has of his vehicle.

The availability of e-Cars in Namibia could be particularly beneficial for the tourism industry. “An electric vehicle is ideal for a game drives because it does not make any noise and you won’t disturb the animals,” Madryn says.

Their prototype is so quiet, it has both men equally excited.

“Imagine that only electric cars would drive in the city. How wonderfully quiet it would be!” Madryn says.

However, silence is not the only advantage: You’ll also be saved a trip to the fuel station with an electric car. “You can charge the car at home from a normal power outlet, which takes about ten hours,” Axel explains. “Theoretically, it would be faster, but then you will need more power.”

For their prototype, the batteries are housed in an aluminium box on the bakkie bed, but this won’t remain so. “This is just the beginning. From now on we’re optimizing,” Axel says.

The batteries that they use are harmless, as Madryn explains: “We use lithium iron phosphate batteries. They’re eco-friendly and fully recyclable, although they are a bit more expensive. The chemicals inside are less dangerous compared to ordinary lithium-ion batteries, and no raw materials like cobalt are needed,” he says.

Cobalt is found in many batteries, with most being mined in the Democratic Republic of the Congo, where human rights violations and armed conflict between government forces and militias are recurring.

Unlike many European and American automakers, the two Namibians deliberately want to do without this raw material.

First do no harm

“We really want to do no harm with our batteries,” Madryn says. The batteries for the electric car can be used for about ten years before they have to be replaced. “After that, the batteries can still be used in other devices,” Axel adds.

Both say that their commitment is not based on political conviction. “We’re not doing it because we want to get electric cars on the road at any cost. We’re doing it because it’s the right thing to do here and under our conditions,” Axel says.

With their prototype, the two want to show that technical progress is not only created in Europe and the USA.

“I think electric cars rely too much on expensive car manufacturers,” Madryn says. “We also have a lot to contribute to progress in Namibia. We want to be part of development, not just as consumers.”

Axel agrees: “We want to prove that this is not difficult. It’s not quantum physics – it really is ­feasible.” 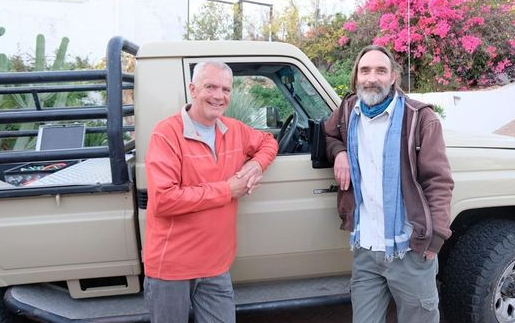